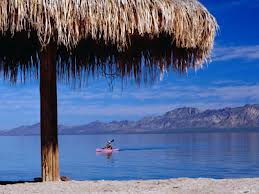 Seven days in paradise, and then today.  I really enjoy Baja, I like the people, I lie the food, I love the beaches, and then you have a day like today, and you think – man, maybe I should just go home.  Of course, for us, home is relative, so that’s not really an option.  The morning dawned beautiful, an incredible sunrise over ScorpianBay, we had listened to the crashing waves all night  from our spot on the bluff.

Yesterday, when we had gotten to the Cantina at ScorpionBay, there had been No Trespassing signs posted, or at least, that’s how we interpreted them..  They were taped over the doors and windows, the only word I could read was “by legislation” so we figured they had done something wrong and got shut down.  We talked to a local American and she said it was closed a few days before and she pointed us to the camping area.  We checked out the bathrooms, those appeared to be maintained well, so we found our camping spot and slept well.  After a long walk on the beach, we loaded up our camping gear and made one last run by the bathroom before we hit the road.  This guy was sitting outside them and demanded 300 pesos because we had camped there.  I was like, no way, we aren’t paying; Big said, we’ll pay, but not until after the guy threatened to call the policia.  It was all very weird and felt like extortion, but at least we got out of there safely.

We drove the race course back through La Purisma to just south of Mulege on Highway 1.  What should have been a little over 3 hours, was more than five.  The damage from Hurricane Andy was very obvious, the washes were all full of rocks and cobble after having been swept down the mountains in the rain.

Our next stop was Buenaventura.  It’s a little place with a bar and restaurant, good wifi, and you can camp on the beach.  It costs you for showers, but not the beach.  That doesn’t bother me so much, they do have to truck in the water, what does bother me is the lady who runs the place.  She is very forgetful, so forgetful in fact that she never remembers that you’ve already paid.  We saw that happen two years ago when we were there and thought it was an isolated incident.  It wasn’t. In the course of the afternoon and evening, we saw it another three times today and she even jacked us up too.  So, word of caution, if you go there, don’t run a tab, pay for each drink as you get it.  Always use pesos, she screws up the conversion, and ask the cost of a meal before you get it.  There are no menus, so you get to pay market price which is whatever her drink adled mind is thinking at the moment.  Today is definitely one for the books, it just all felt wrong.  We’ll see what tomorrow brings.