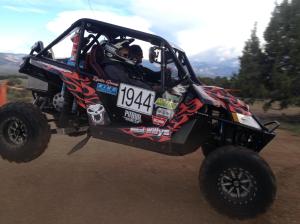 Cedar City, Utah…race week, we are setting up the race course and rock crawl for the weekend, so we’ve been on site at Three Peaks Recreation Area for a week.  I love our life.  The boys finished marking the race course today, so I was finally “allowed” out to walk the course.  Up to this point, I’ve been relegated to walking the perimeter where there was a fence I could follow.  Pretty smart, actually.

The course is well marked, Josh and Kyle did a great job, I walked 5.5 miles of it, it’s a little longer than that, I opted not to do the weaving within the county park area and beelined it to the trailer.  My phone had died at mile 3 so I was a little bit bored, no music left.  It was a great hike, but it sure seemed like it was uphill both ways, just like my dad used to claim when he walked to school.

There aren’t really very many animals at this park, we’ve seen a bunch of jackrabbits, some lizards, but not much else.  Most parks there are some deer, and a number of times there have been rattlesnakes, I don’t miss those.  What I did run in to today were two hawks that were pretty unhappy with me.  There must be a nest nearby, they squawked and squawked.  I love the sound of predator birds.

Getting back to the park, I found our friend Todd had showed up to do a little wheeling – getting ready for the weekend.  When he offered me a ride in his Wildcat I was all for it.  I climbed in through the window, no doors of course, strapped on my 5 point harness and tightened them down.  I threw on my helmet and grabbed the “oh, sh**” handle, I was ready.  Todd took off and put some speed on it, it rolled over the mounds, the rain started and was pelting us, made it a little painful, but not enough to make us stop.  We finished the last section of the race course within the County park and came around for the road crossing jump.  Todd hit the throttle and we jumped, it was awesome.  I love that flying feeling.

Thanks, Todd, for giving me the opportunity to ride in a UTV, even after all the races we do, I almost never get to ride.  It was fun to see it from a racer’s perspective

Today’s adventure finds us in Cedar City, Utah, not a spectacular location, but it holds some awesome things.  Our first stop was Three Peaks Recreation Area, it’s a county run OHV park, set up for off-highway use, bicycles, motorcycles, etc.  It’s awesome, not only does it have trails everywhere, but great picnic areas, bathrooms, rocks and views, and it’s clean too.  One of the better built government owned facilities.  Then we went downtown, parking was a hassle because it was the Heritage Festival parade, they run 2500 sheep right down through the middle of town for this one, it not only celebrates the heritage of the area, but also gives the ranchers an opportunity to move their sheep from the high country.  Lots of folks turned out for the parade, we parked in the back and snuck in one of my favorite stores.

Gem Jewelers is a locally owned jewelry store.  Kevin and Tyrell Taysom do incredible work here.  They are both professional jewelers and build most of the jewelry they sell.  Gorgeous stuff, from elk jewelry to wedding sets.  Kevin tells me they survive mostly on repairs (these come in from a multi-state area) and custom jewelry.  Because there are so many chain stores now, not many shops will customize jewelry as they do.  We were shopping for a wedding ring.  When we were here in May, I bought Big’s wedding band, I’ve been carrying it around with me since.  When we first got engaged, over two years ago, we bought an engagement ring off ebay for me.  It was a great deal, no it was a screaming deal, and I had to have it, because I couldn’t see being engaged without a ring.  Just me being me, I guess.  He had asked me once what needed to happen before we got married, I told him, I want my ring upgraded.

All he got was the hat 🙂

We looked closely at the diamonds and the settings, the ones I liked were custom built right on site.  The lighting is so beautiful in there the bling was blinding me.  I had to go outside and look at the rings in the shadows.  We ended up buying a beautiful custom ring from Kevin.  I am a lucky girl, and if ever you are wondering about the jewelry business, and how to shop for diamonds, bypass the mall, make a little road trip to Cedar City and talk to these guys.  They will show you their albums with photos of all the work they’ve done.  Trust is the number one thing you need when talking jewelry and I trust these guys implicitly.  Thanks Kevin, together with Big, you made a happy girl.  These guys have now taken away my all my excuses…what to do now?