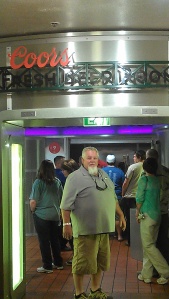 I’m not a complainer – honest – I hate people that find the negative in everything, but there are some days that you know someone is just not doing their best.  In fact, it was way too obvious that our host didn’t want to be on the job.

We visited the Coors Brewery in Golden, Colorado, “Taste the Rockies” they say, and we did.  Coors is very generous with their beer on their tours.  Three glasses at the end, that’s a whole lot more than we got at the Yuengling Factory last month.  But what we didn’t get was fun.  Apparently, Kyle, our guide, had had enough fun that day.

I am always fascinated by how things are made, Coors is a huge plant – the largest single site brewery in the US.  They also are a zero waste facility, nothing goes in a landfill, that’s pretty cool.  It doesn’t matter if it the waste being shipped to the farms or the cans recycled for future use, nothing goes to the dump.  I like that.  And did you know that one of the Coors family invented the aluminum can and didn’t patent it, because he wanted all companies to use it, that also is pretty cool.

These fun facts I learned by reading the walls, because our guide was whining about what a long day it was.  Three times he said he was ready to go home.  When it was all done, I told everyone who worked there what a lousy job he did.  You see, this is how I look at it.  It doesn’t matter if I was first there today, or last, my time is as valuable as the next guy’s.  I deserve 100% of what he has to give.  But let me be honest, it wasn’t just Kyle.  For a company as big and profitable as Coors, they should be trying to create fans.  That means, maybe everyone shouldn’t have to wait so long for their tour; maybe everyone should be given more information; maybe they should be trying to win us over from the start.  As it is, they have a long way to go.  Sorry Coors, no fans created here, we’re going to drink something else.

Coal is the lifeblood of this Pennsylvania landscape we are in, anthracite coal to be exact.  There were millions of tons of coal buried in slants under the landscape and many worked hard to remove it.  One of the best places to view the process is the Pioneer Tunnel in Ashland, Pennsylvania.  We stopped at the local museum first to look through the exhibits and see what was to be seen.  They do a great job of sharing how the coal is formed and how it is different than other coals.  The fields of coal lay under the mountains in this area in a vertical slant, much of what is extracted is done from underground.

The Pioneer Tunnel piles you in to a Loki and takes you down the tracks, 1800 feet in to the tunnel, the tracks stop.  There are many veins of coal that you pass under in this tunnel that was actively worked until 1931.  There are offshoots that you can walk down to see the chutes that have been dug both high and low from the tunnel to extract the coal.  The process is dirty, dangerous and back breaking.  Over 31,000 men have died in the industry since the process began.  While the press plays up the big explosions and collapses, the majority of men were killed one or two at a time doing industrial work.  Our prayers for all of them.

Not far from Ashland is another Pennsylvania treasure.  The Yuengling brewery, founded locally in 1829, it is the oldest American brewery.  The story starts five generations ago when a German immigrant, D. J. Yuengling came over to the new country.  He wanted to bebuild a brewery to support his family, so he looked for a place with a strong German culture, at that time in Europe, men, women and children in Germany drank beer.  He wanted to replicate that formula so he had built in buyers.  He landed in Pottsville, where the original brewery still stands – well, almost original, as was common in those days, the first one burnt down.  What I loved about the place was the sense of history, the world has not been scrubbed and polished, the doors still swing on pulleys, the basement is still dug out and accessible, there is no security at the door making sure you follow every sign.  It feels small, it feels personal, it was awesome.

The fifth generation still heads and owns the brewery today, there have been five male born descendents that have headed the company…the current one is 71 years old and he has four daughters active in the industry, but no sons.  A change is afoot.  Over the last fifteen years, Yuengling has expanded tremendously from it’s humble origins, there are now two additional breweries that each brew 1.7 million barrels a year, in addition to the original brewery.  Yuengling can be purchased in 18 states and is continuing it’s expansion.  Pretty impressive for a local brewery.

There is one more thing in Pottsville that the locals are proud of, perhaps more than the brewery even.  That is the Pottsville Maroons, a professional football team who won the championship in 1925.  Perhaps you’ve heard of them, they go by the Washington Redskins now.

Our racers and rockcrawlers have the best sponsors!  Not only do they keep them in parts, and funds to travel, but sometimes, they add to the party too!  Pedernales Brewing Company supplies one of racers with beer, now that is a good sponsor.  Each of the Central Series races, Carl regularly comes with a keg of beer, or two to share with the rest of the racers.  We have had dark and light, ale and Hefe, all of it delicious.

When we were in Fredericksburg, Carl arranged a tour of the brewery.  Technically, they are a micro-brew.  In 2012, open only for 8 months, they produced 750,000 cases of beer.  In 2013, they are set to exceed that amount.  Last year they were ranked #14 for microbrews in Texas in production, this year, they will exceed that amount, growing to the #2 or #3 producer.

We were lucky and the owner, Lee Hereford, gave us the tour.  Lee and his brewmeister have put together an impressive operation.  They brew to the German standard, which means only four ingredients can be in the beer:  water, hops, barley and yeast.  That’s it, just four, only when they brew Hefeweisen to they add an additional ingredient in wheat.  Now you would think that with just four ingredients, all beer would taste the same, not true, not true.  Their beers are as individual as any you will find, and I think it’s because they do something pretty special.

Each beer is made from an old recipe, some from the 1800’s, some from the 1900’s.  Each of them comes from a specific location, so to be able to match that beer and that location, one of the four ingredients must be changed to match.  That’s the water.  Pedernales filters their Fredericksburg water to its’ purest possible state, then through research on the part of the brewmeister, the water minerals and salts are added back to match the water that would have originally been in the beer.  One example is a recipe they use from St. Louis in 1910.  The water is brewed, just as the beer would be to match the water that you would have drank in 1910 right from the tap in St. Louis.  I believe that is what makes their beer unique, attention to detail.

So, when you are hanging in Texas, stop by and ask for a Lobo…it will come from the Pedernales Brewing Company and I guarantee it will be great.  Enjoy it and bottoms up…for the rest of you, watch for them, they are growing by leaps and bounds.

It’s Sunday, we are hunting for a place to watch the NFC championship game in Temecula.  Everything suggested to us is a chain, and I’m just not in to chains.  Driving around, we notice a brewery in old town.  The Crush and Brew, now that’s a clever little place.  They have a wine side and a beer side and only serve cold foods, it sounds interesting and for a Sunday at noon, it’s perfect for us.  We opt for the beer side, there is a TV and Jenn is our server.  Over 22 beers on tap, some as high as 12%.  Rich is an IPA drinker, so he chooses a sample platter of those, I go for a wheat beer, like usual.

At halftime, we are lamenting the slow start of the forty-niner’s, but have placed our order for the Big Block, it’s a cutting board full of meats and cheese, bread and various condiments.  Perfect for two.  The meal and the beer combined with a winning football game transform a mundane Sunday afternoon in to a great day.  But that’s not all.

During the first quarter, we met Carol and Ernie and their daughter and son-in-law.  They are out touring the area, from Riverside, they like to spend their weekends looking for breweries and good food.  Temecula was their stop today with the help of Yelp.  I overheard a conversation about brew festivals coming up and asked them what they found.  This translated in to thirty minutes of animated conversation with some terrific people.  On top of that, they paid for our first round before they moved on to their next stop and came by for hugs to thank us for the conversation.  Wow, some people are just so nice.  So raise your glasses everyone to Carol and Ernie and all the kind people out in the world like them.  Perfect strangers can become perfect friends.