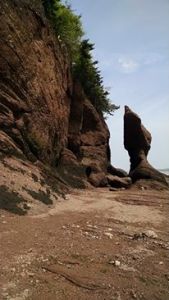 Rich was able to check a few more states off his “visited” list during these last ten days.  We travelled to Boston for Independence Day, a beautiful long weekend to enjoy.  We ate well, we visited National Parks, we walked miles.  Then we rented a car and got out of Dodge.

We headed north out of Boston to Salem, not to learn about witches, but to explore the Maritime history there.  From there, we stayed on the coastline through New Hampshire and in to Maine.  The food got better and better the farther we went.  Every stop, Rich grabbed his phone and posted a great review on TripAdvisor.  It seemed each location was trying to out do the next in the flavors. (Did you know you can get a lobster roll at McDonald’s?)

We had an awesome night at Glen Cove Motel between Rockport and Camden, Maine.  The food was incredible, the views were spectacular, everything about it was idyllic.  It was hard to leave in the morning, but Acadia National Park was on the agenda.

I’m a huge fan of National Parks, this one left me feeling a little blah.  I’m not sure what it was, but probably the sheer number of people that were visiting on a Tuesday.  I was sorely disappointed.  The rocky shores were gorgeous, even the fog was cool – literally and figuratively.  I’m glad we went, but I feel sorry for the people on the east coast who have only this one nature preserve to go to.  In the west, we have so many spaces, I guess I took them for granted.

Next up was New Brunswick, Canada.  We drove the Fundy Road along the coast and were treated to some beautiful scenery, we stopped and saw the Flower Pot rocks, the reversing rapids, anything along the way, we saw.  Our favorite stop was An Octopus Garden Café in Alma, New Brunswick.  We had stopped in to the hotel restaurant earlier in the morning, and thank goodness they were busy.  I looked at the menu and was so disappointed at the standard fare being offered, we waited for a bit and when no one stepped up to take care of us, I suggested we go find something else.  We were kind when we left and just let them know we were looking for more exotic food, they seemed to understand.

So we drove down the road two blocks (any more than that and we would have been out of town.) As we read the menu, I opted for breakfast food, but noticed the lunch special was a lobster roll.  Technically, we were way too early for lunch, but when Rich ordered it, they smiled and said sure thing.  Rich checked us in on Facebook, and the owner came out of the kitchen to say hello.  Joel was awesome, he took an interest in what we were doing and made sure our meals were perfect.  We visited for quite a long time about his business, it was great to see the passion he had for what he was doing.  I love that.  So lobster roll consumed, we headed to Nova Scotia.

Nova Scotia is the most eastern province that is still attached by land, everything else requires water travel to get to.  It means New Scotland and the communities reflect that in the northern states.  So much to do, so much ground to cover.  I can’t wait to share it all with you.