Valuable lesson learned today, “if you are going to read at all, read it all” Ichigaya and Ichikawa are not the same words.  We are changing hotels today, the first two nights were downtown in Shinjuku, the next few are in Ichikawa.  I know exactly where that is…NOT!  I knew where Ichigaya was, just three stops down from the Shinjuku station.

We wandered around the Shinjuku area for a bit, went to see the government building, wanted to go to the park, but that was not to be.  As we got to the park entrance, there were barricades proclaiming that someone in the park had dengue fever and the place was quarantined.  Wear long pants, long shirts, no bare feet.  I looked at what I was wearing, shorts, no sleeves and sandals, yay…that’s a no go for me.  So we skirted the park and walked through the mall area, took some pictures and finally boarded the train.  We were carrying all of our stuff, so not too excited to do marathons around the city. 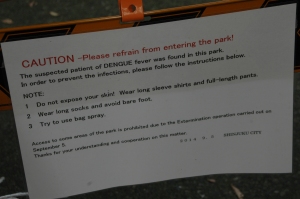 We got off at Ichigaya station, found a Starbucks, we had a little time to kill before we could check in to our hotel.  Finally decided to make our way there, nothing looked familiar to the little map we were carrying, so we finally asked a guy.  He said, “Ichikawa?”  It sounded the same to me, after a little more pantomime and broken English, we realized we were in the wrong place, he walked us back to the train station and helped us find the line we needed and pick out the station – all in Kanji of course, so we couldn’t read it.  We bought our tickets and got on the train.  I had it figured out, it was 11 stops from where we were.

We got on the train and rode, one, two, three….nine, ten, eleven, this was not Ichikawa, we kept riding.  The train finally made it to the terminal, we got off.  We were obviously in the wrong place.  After consulting various maps, an app or two, Google and everything else we could find, we discovered we had ridden the train west.  We needed to go east, in fact, not far from where we were yesterday.  We got back on the train, passed the Shinjuku station (for the third time today), passed the Ichigaya station, and eleven stops and 63 minutes later, we were in Ichikawa.  A short sprint to our hotel and we were checking in to a full on Japanese hotel.  No English spoken here, Naozumi had found us a place to stay that no gaijin are at, it’s perfect.

We got lunch from a vending machine, well, not really, you order through the vending machine, but they bring you your meal from the kitchen.  Walked the streets to take in the local sites.  This is what Japan is about, I’m loving this!