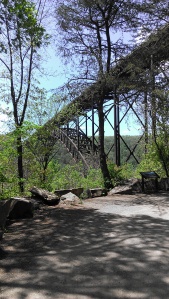 New River Gorge National River is a National Park, who knew?  I found it by accident on my map as we looked for something to kill time with in West Virginia.  The bridge and the whitewater rafting is what attracts most to the area.

The bridge is impressive, built of steel in the late 1970’s, it is taller than the Eiffel Tower plus two Statues of Liberty.  Viewing it from the river side is particularly impressive.  The area played an important role in the industrial revolution, it hauled coal on the railways from the mines tunneled in to the mountain there.  People came from all over for the jobs that were available in the area.

The Park Service has taken ownership of 70,000 acres, but for once, they haven’t shrunk the value of the area.  I am not one to criticize the National Park Service, I love the properties they have preserved for the future.  What they have done differently with this one is to continue to allow use of the river for commercial purposes and there is even hunting on NPS land.  That makes great sense to me.

Josh and I got our Junior Ranger badges too, not sure how many that is now, but it sure is fun.  The last project in the JR handbook at New River Gorge was talking to a Park Ranger.  Ranger Billy was at the front desk of the Visitor Center, so he was our guinea pig today.  My first question…”what is the most asked question at this National Park?”  he smiled and said, “Where’s the bathroom?”  Apparently that is the most asked question at every National Park.  We had a great conversation, someday, maybe when I grow up, I will get to be a park ranger.