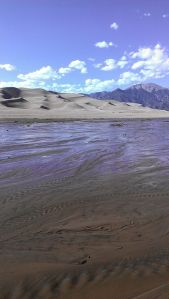 I used to pride myself on being a great navigator, I thought I was awesome at figuring out where I was and where I was going, apparently I fooled myself for almost 50 years, because today was a reminder that Navigation is really not my thing.

Big and I set out from Colorado Springs today to do some sightseeing, we had a plan.  Take the 115 out to Canon City, stop at the Royal Gorge, then weave our way around the 69 to the 160 and the Great Sand Dunes National Park.  Yep, that was the plan, and then he handed me the atlas.  I managed to get us on the 115 and out to Canon City, found a great little burger joint – Bunkhouse Burgers – highly recommended, even found our way to Royal Gorge…or maybe I should rephrase that to Royal Gouge.  We didn’t stay.  While I recognize that it is cool terrain, we have seen gorge’s before.  Flaming, Snake River, and many others…no way was I paying $26 a piece to look down at a canyon.  The place was super touristy…not our thing, so we passed.  Hopped back in the Jeep and headed out.

We found some beautiful roads along the Arkansas River, some gorgeous ranches, which we keep trying to convince ourselves we are in the market for, and then we got distracted in Westcliffe.  We turned off from the 69 to tour the city, and then forgot to make the turn again.  Sixteen miles later, we were on the 96…”that’s not right, we are supposed to be on the 69”…a quick look at the atlas and we realized our mistake.  Nothing a little 32 mile out of the way round trip won’t fix.  We were back on the 69 and headed towards Gardner, I kept seeing signs off to the west that lead to Great Sand Dunes, but Big thought we should get fuel first, unfortunately, Gardner doesn’t sell fuel, so we were back on the road to Red Wing.

My second navigational mistake was when we saw the sign for the 160 “ Do we need that?” he asked, “I dunno.” And we kept driving, about four miles down the road, I was like, “Oh, hey, we need the 160.”  He just looked at me, and then turned around.  This time we were only 8 miles out of the way.  But the best part of the trip was ahead, we took a little dirt road from Red Wing to the 160…most beautiful road we’ve been on in awhile.  It was like a little oasis from all the high desert.  On the 160, we still had plenty of driving to do, headed to the National Park.  We had paralleled the Sangre De Cristo Mountains all the way, I couldn’t figure out where they were hiding sand dunes, and then they were there.

So cool to see sand dunes in the middle of a mountain area, and a beautiful little river running beside them.  There were kids everywhere building sand stuff, nothing actually looked like a castle, and swimming in the ankle deep water.  People were hiking the dunes and generally enjoying themselves, with the exception of the pregnant mom with two under five.  Our plan was to take the MedanoRiver pass back to the 69, as that road is open to four wheel drives, but alas, it was closed.  There was a small plane crash on the pass yesterday and it was still being investigated.  At least that navigational error was not my fault.