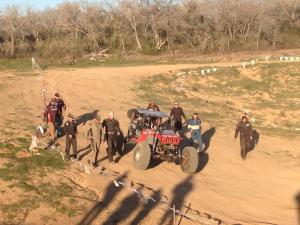 Like lightening, I had a thought today – I totally understand what happened to the summer of 2012.  It passed so quickly I don’t remember a thing, now I know why.  Race season.  I’ve been true and faithful to my blog since my birthday, posting almost daily, sharing my world with others, race season started two weekends ago and I’m already behind.

We had a race last week in Auburn, Alabama…this weekend was Bryan, Texas.  There are so many pieces, parts that have to happen to put an event on, there seems to be no time for anything else.  Now I get it, last year we didn’t schedule great and had eight weeks in a row, that would be the

majority of my summer.  This year we have scheduled better, we get a week off at least every two – well, maybe not a week off exactly, but at least there isn’t an event every weekend.

Yesterday’s Main Event saw a great ending, The checkered flag was thrown for winner as he came through the finish; he was followed quickly by six additional racers; one had broke about three laps back and would be the only 4400 class to not see the checker.  Left on course was Tony Arledge from Austin within sight of the checkered flag, but with no steering.  He had made the turn on to the short course and his car led him up the embankment towards the pond; Tony got it stopped, but could go no further, we could see him from the start/finish line.  Tony ran back to the pits to get tools and parts to fix it, we left the clock running. After a few minutes, the co-driver called in and asked if he could help steer from outside; there were no other cars on course, so Big approved it.

There were a number of drivers at the start/finish line who noticed what was going on and started out to help; Big called them back – this is a no chase race; they looked at each other and back to Big, said no problem, no one is going to protest the finish and off they fled.  The drivers steered the car down in to the bowl, around the dirt track and up the hill to the finish line by physically shifting the tires in to the direction they needed to go. Car #595 had plenty of horsepower available, but manual steer was required, Tony Arledge took the checkered flag for his first race of the season.  It was awesome to see the team work.

I’m so proud of our Dirt Riot family, the way they work together, the way they play together.  I am truly one lucky girl, even if this summer disappears like last years’ did, at least I will be in good company every weekend.