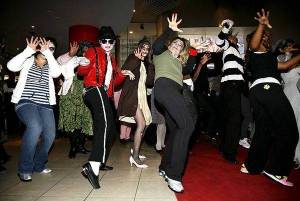 It’s a beautiful day at sea, a little choppy out there and the temperature has dropped as we started heading north, but it’s still at least 60 outside.  We played a little bingo this morning and then found our way to the sports bar for the football game.  Rich is a huge San Francisco fan.  It doesn’t matter whether it’s the Giants or the 49r’s, he is a tried and true fan.  We had to squeeze in to the bar during the Denver game to be sure we could find a seat.  Turns out the ship figured out how many football fans were onboard and put the game up on the giant screen at the Lido deck pool, but by then, we were ensconsed in the bar.  We met some great football fans and watched San Franscisco win, then I was off to the Spectacular to learn how to dance Thriller.

My daughter, Haley, is a dancer and singer.  Well, she was never a dancer before college, but she is now.  She can pick up moves super fast and one of those was the Thriller dance back in November.  She and her crew were the hosts at a party for the Canadian Railway and they did a flash mob of Thriller for the guests.  When she told me about it, she said the liaison had taught it to them and it took minutes, so I was feeling pretty confident about learning the dance.  I mean, really, if a bunch of dancers could learn it in minutes I should be able to learn it in a half hour or so.  Yep, no.

Samuel was teaching again, we learned a little salsa from him earlier in the week.  The moves aren’t terribly hard, but there are a bunch of them and they come on fast.  I think if they slow the music way down for me, I might get it after another hour of trying.  The only good thing, my kids were there laughing with me.

After that we played our last game of bingo and then we were in the house for the Free Cruise raffle and the free bar tab raffle.  At one time in my life, I won every raffle I entered, my luck was phenomenal.  There was one Relay for Life event I went to that I won 9 of the 12 raffles I entered.  Last year, at Jeepers Jamboree, I had the numbers on either side of the giveaway for the Jeep.  So, of course, I was right in there for the free cruise.  The numbers I held were 485426 through 485430.  The winner was 485425.  One number.  I told Rich that I used up all my luck when I got him, so I don’t win anything anymore. Bummer, although I wouldn’t trade him in for anything.

Today was supposed to be our last day on the cruise, I’m so glad we get one more.