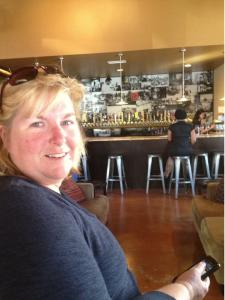 It’s Sunday, we are hunting for a place to watch the NFC championship game in Temecula.  Everything suggested to us is a chain, and I’m just not in to chains.  Driving around, we notice a brewery in old town.  The Crush and Brew, now that’s a clever little place.  They have a wine side and a beer side and only serve cold foods, it sounds interesting and for a Sunday at noon, it’s perfect for us.  We opt for the beer side, there is a TV and Jenn is our server.  Over 22 beers on tap, some as high as 12%.  Rich is an IPA drinker, so he chooses a sample platter of those, I go for a wheat beer, like usual.

At halftime, we are lamenting the slow start of the forty-niner’s, but have placed our order for the Big Block, it’s a cutting board full of meats and cheese, bread and various condiments.  Perfect for two.  The meal and the beer combined with a winning football game transform a mundane Sunday afternoon in to a great day.  But that’s not all.

During the first quarter, we met Carol and Ernie and their daughter and son-in-law.  They are out touring the area, from Riverside, they like to spend their weekends looking for breweries and good food.  Temecula was their stop today with the help of Yelp.  I overheard a conversation about brew festivals coming up and asked them what they found.  This translated in to thirty minutes of animated conversation with some terrific people.  On top of that, they paid for our first round before they moved on to their next stop and came by for hugs to thank us for the conversation.  Wow, some people are just so nice.  So raise your glasses everyone to Carol and Ernie and all the kind people out in the world like them.  Perfect strangers can become perfect friends.