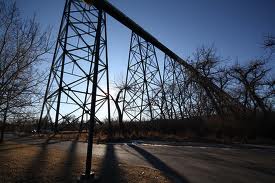 We’ve been working steadily on our “current project” (see Day 307) and I’m bored, everything that needs to be ordered has been, we are now in the prep stage, but it is tough to get excited.  No progress is visible in the stuff we are doing.  So we took the day off!

I texted my daughter and said “We are going to Canada for the day, thought someone should know.”  I don’t know, it was just, hey, if we are leaving the country, should we tell someone?  Our goal was Lethbridge, Alberta, Canada.  I had researched online things to do there, and let me tell you, they have lots of things on their list, but none of them are really pertinent to a 10 degree day in winter.

I really wanted to see the Head Smashed In Buffalo Jump, but they are closed.  I also wanted to see Fort Whoop Up, but they had a flood and they are closed too.  Of course, the Birds of Prey Center and the Japanese Gardens, closed, the Bellevue Underground Mine, closed, the Helen Schuler Nature Center, closed.  So on this gray day in December, we looked for other things that maybe the visitlethbridge.com website didn’t promote so well.  This is what we found.

The Galt Museum, open, an interesting perspective of the building of Lethbridge.  The most exciting conversation there was comparing Canadian money with the Mexican pesos still in my purse.  They are remarkably similar.

On the corner of 4th and 13th, there is an incredible Victorian House that was open this weekend for Christmas tours benefiting the local foodbank.  The house was beautifully decorated.  The most Christmas lights I’ve seen this season.

The High Level Bridge is an incredible structure, located right near the Indian Battle Grounds, it is a marvel in engineering.  The longest and tallest structure of it’s type in the world, built during the years 1907 to 1909 to allow the Canadian railway a better route through Crowsnest Pass.  I really liked this.

But my favorite thing we found to do today, was a stop at the Lethbridge Curling Club.  Yep, you heard me right, we went to watch Curling.  Now, I don’t know a damn thing about Curling, still don’t.  I watched them slide their stones, I watched them sweep, I watched them use their little booties and balance pods.  I still don’t know how it’s scored or what the rules are.  What I do know is that it appears to be sport for all ages, body types and temperaments.  I know you don’t have to slide on the ice, you can gallop like one old man we saw, that you should dress warmly while you are on the ice.  I know that everyone appeared to be having a good time, although many were very serious about their sport.  I guess it’s a sport, after all, it is in the Olympics.  I’m pretty sure I could play, I just have never seen a Curling center anywhere in the states I frequent.  If you are trying to picture it, think bowling alley, it looks a lot like that.

Oh, and if you a picking a location for a Canadian adventure, probably Lethbridge shouldn’t be your first choice, at least not if it is after Labor Day and before the Spring Thaw.  Now I know why the border patrol dude laughed when we said we were going sightseeing.