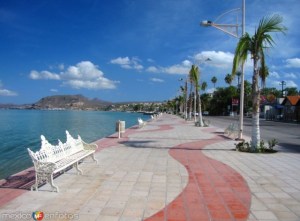 Whew, time to relax, finally.  Race week has been a blast, so much fun, so much intensity.  These are good people we’ve been with.  We finally saw some of our team this morning, that we haven’t seen throughout the race.  It’s funny, in a point to point, not everyone starts at the same location, so there’s no time for the whole team to be together.  Others we didn’t see at all because they took off going north again already.  Next year the Baja 1000 will be a loop race again, so it will mostly stage and focus between Ensenada and San Felipe.  We’ll see them all again then.

We are staying at the Araiza Palmira Hotel in La Paz, a quiet little unassuming hotel at the end of the Malecon.  It is really very nice, the beds are comfy, the staff is friendly and it’s just enough out of the way that you feel like your stuff is safe.  We walked down the Malecon for dinner, along the beach, just a sliver of the moon out reflecting on the water.  Very peaceful.  The little place we found was much bigger than we thought from the outside, but it was early so it wasn’t very busy.  As we perused the menu and talked about our choices, the chef came out and spoke with Big.  It’s a Mexican thing, he wouldn’t really address me.  Big asked about scallops, of course, he said, would you like with shrimp too.  Of course, was the response.  I could see the guy opening the shells, the scallops were huge and fresh, about an inch and a half in diameter and grilled to perfection.  Throw in some grilled shrimp (with the heads on) and we had an incredible meal.  First dinner we’ve had sitting down since we got to Baja.  Taco stands are where we usually eat.

We are taking off after another good night’s sleep and headed to the beaches, our first trip to Scorpion Bay is on the agenda on the Pacific side and then back to the Sea of Cortez side to Buenaventura.  But who knows, there might be a beach along the way that demands our attention.  The area south of Loreto was so green and beautiful when we sped through the other day, I’m looking forward to seeing it without tired eyes.