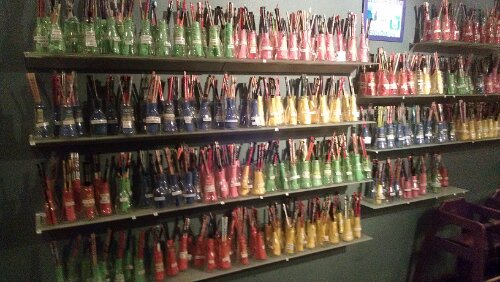 For years I’ve been listening to this, “I fish with my bait, not eat it” every time sushi was suggested for dinner.  So, imagine my surprise when last night Rich suggested Sushi on our way back to the truck.  I was thrilled.  Last week in Las Vegas, we had dinner at Roy’s, it was our post-engagement/my birthday dinner sucked/I’ll make it up to you dinner.  Not to say we haven’t had good meals in the 35 days since my birthday, but this was the first one that was just us.  Date night.  Roy’s is a Hawaiian Fusion restaurant, we ate incredibly good food there, including a sushi roll as an appetizer.  He tried it, and liked it, although he was loathe to admit it.  So last night, he tried it again.

We have been in the greater metro Phoenix area for most of this week, coming home from a friend’s house last night, we were on Higley and saw the Sushi Ave., Asian diner #1 sign, we had been talking about dinner, but I hadn’t even suggested sushi because I just knew he’s say “I don’t eat bait.”  We pulled in to this cute little place, part of a strip mall that consisted of a convenience store and an O’Reilly’s Auto Parts and went in.  It appeared to be a mom and pop shop, my favorite, dad was the sushi chef, son waited on us, mom was doing what mom’s do best, cleaning/prepping/smiling at the customers.

The food was delicious, we had two rolls, a baked roll called “burning love” with crab, tempura shrimp, eel, whitefish and albacore tuna, and a dragon roll.  Chopsticks in hand, we finished every bite with a little wasabi, soy sauce and ginger.  As we were leaving I got my camera out, they have this very colorful set of shelves with personal chopsticks for their repeat customers, apparently, you can have your own, for free, set aside for you for your next visit.  I love the concept, it encourages loyalty, why would you go anywhere else?  I’m like Norm, I just wanna go where everyone knows my name.