Our afternoon found us at another National Park, this one was Bryce Canyon, a lesser know park than several around the area, but I think only because you have to travel a little farther to get there.  Bryce is beautiful. 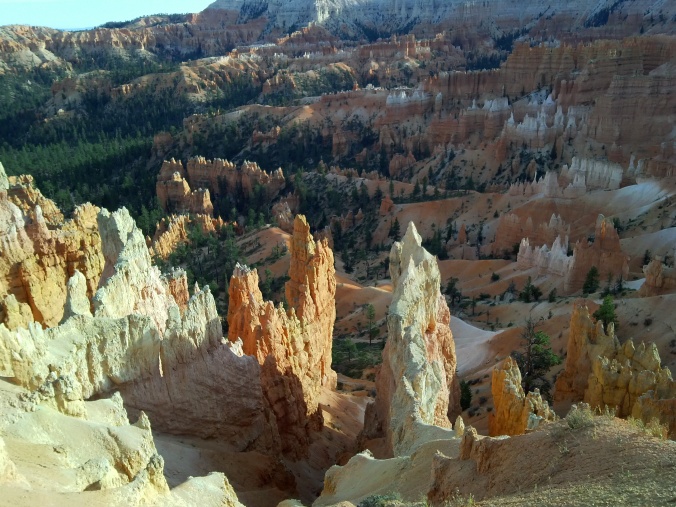 Last winter we visited Saguaro National Park, and on a whim, we asked for the Junior Ranger handbook for Josh to do while we went through the park.  He worked on it, we all learned a lot and messed around some.  When he turned in his book, the Ranger at the Park denied him his badge.  It was heartbreaking.  What had started out as just some fun, took a nasty turn.  It wasn’t just Josh that was denied his badge, a little 5 year old was also scolded, it just took the joy out of hanging at the park.  Since then we have visited several other parks, but it wasn’t until today that Josh wanted to try the Junior Ranger program again.

Now for those of you that don’t know him, Josh is awesome, he is 25, a big kid, he works for us in the rock crawling/racing business.  I love Josh, he has a big heart, he is strong and talented and can make anyone laugh.  Academics was never his thing, but he’s as smart as they come and can do anything.  A great photographer and an even better friend to all that know him well.  Our team doesn’t thrive without him.  Josh is not related to us by blood, but we tell people that I have three kids, Rich has two and together we have Josh.  Anyone would be proud to have his as a son, so we claim him when he is with us.

Back to Junior Rangers, Josh asked at the front desk for the Junior Ranger handbook, the Ranger there gave him specific instructions on what needed to be done to complete the program.  Attend a Ranger led talk, pick up 20 pieces of trash in the park and complete six of the activities in the book.

I helped him figure out which six activities in the book, this is the Academic part that he struggles with, but he was so intent on succeeding that he worked really hard on this part.  In fact, he was so focused on getting that part done and right that he forgot his camera when we were headed to meet up for the Ranger led talk.  At 5:22 p.m. all the requirements were finished, we headed back to the VisitorCenter to turn in his book.  Josh was really nervous, he was afraid he would be denied again.  I have never seen anyone so happy as when the Ranger asked him if he wanted to be sworn in as a Junior Ranger.  He was all about that, we even got him the hat!  Josh, we are proud of you, you worked hard and did your best and it paid off.  This is something no one can ever take away from you.

The Junior Ranger program is an educational part of the National Parks system, it is designed to teach kids, no matter their age, how to care for and preserve natural resources.  It teaches about the local history and threats to the resources and presents a proud heritage to follow.  We learned today that you are never too old to be a Junior Ranger, I think I might try it next.