One of the great things about being on the road is the ability to see people you don’t technically live near.  On Monday, we went out to dinner with one of our nearby racers and his girlfriend/fiancée – no one actually explained the relationship with me, so I’m guessing.  Sarah is a beautiful woman who is so completely free and forthcoming, she has an enthusiasm for life that is quick to see.

It turns out that we both lived on Okinawa in our youth, albeit about 10 years apart.  I was there in the early 70’s, her in the 80’s.  It was fun to reminisce with someone who had actually seen the island and to talk with a fellow survivor of a military upbringing.  Both of us thought it was a great way to raise kids.  I never really thought about all the moving and making friends part until I moved to a small non-military town when my dad retired.  All of a sudden I was in a school where everyone had been together since kindergarten.  That was completely different than what I was used to, what, with people coming and going all the time.  It was different being the new kid.  In base schools, there were always new kids. 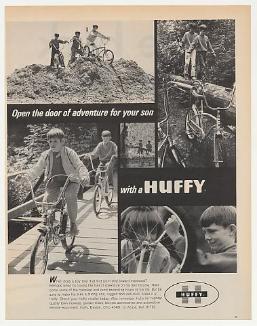 Huffy bikes were for girls too!

We talked about how free it was to live on base, you never had to worry about anything, I remember getting lost after going bike riding with some friends and when it got dark and my friends had left for home, I simply knocked on the nearest door and told them I was Major Cornett’s daughter, could they help me?

We used to run all over the base with our bicycles.  Everyday when I came home, I was reminded to put my bike away, they had to remind me because I was not very good at getting it done.  One morning I got up to find my bike had disappeared.  Oops, I hadn’t locked it up, our next door neighbor was Colonel Calhoun, the chief of military police at Kadena.  I reported my bike missing because my parents made me and I figured that was the end of it.  Not true.  The next afternoon the Colonel called and asked my dad to bring me down to the police station.  Dad loaded me up in the Land Cruiser and we went, I was pretty nervous, I’d never been in a police station before.  When I got there, they set me up for a little interrogation, what color was my bike? Where had I seen it last? What brand was it? Did I have a habit of forgetting my bike lock?  I answered every question.  Next they took me on a stroll past the jail cells.  There, on one of the beds behind bars, was my purple Huffy.  The officers really got a kick out of that, but I never forgot to lock my bike up again.